How do Artists Make Money on Spotify in 2021? How Spotify Pays You 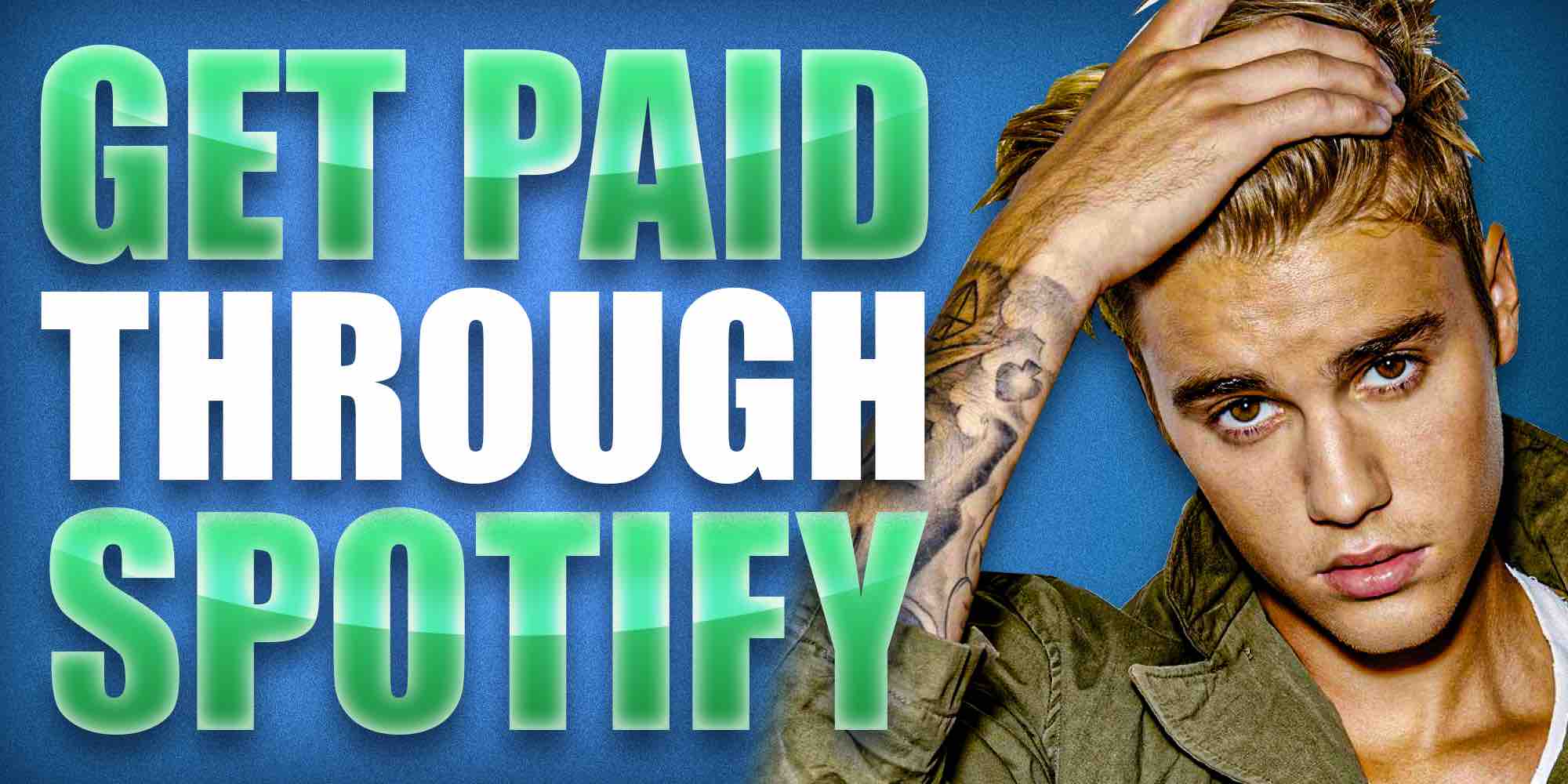 Making money in the music industry as an artist is constantly changing.

The music industry is volatile - from the fall of record labels (as we once knew them), to the rise of streaming services, the way money moves in the music business around the world always changes.

Copyright law makes it such that you as a creator get paid for the work you do.

If you released with a label or independently, you're likely a full or partial rights holder.

Therefore, Spotify is obligated to pay you out whenever your songs get played enough times on their platform.

We'll dive deep on everything you need to know about getting paid on Spotify.

If you're looking to get heard on Spotify, just tap below! 👇

How Artists Make Money in the Music Industry

There are tons of different ways artists can make earn nowadays, with some methods working better than others.

Publishing royalties, merch, shows and brand deals are all ways artists can support a living nowadays.

The most popular (but sometimes not even the best) way artists want to make money is through music streaming services like Spotify and Apple Music.

Knowing how much Spotify pays its artists is important information that can help you understand how much effort and focus you should put into making Spotify a primary means of income as an independent artist.

The fact of the matter is that independent artists earn relatively little off of all streaming platforms in the form of royalties, including Spotify.

Music streaming (and general access to music) is cheaper than ever nowadays for consumers. Premium subscription fees that platforms like Spotify charge are very affordable for the majority of music listeners.

The average music fan spends less today for music as opposed to even one or two decades before. CD album sales would generate tons of income for major labels - net revenue in the music industry has still yet to reach it's all time high again. 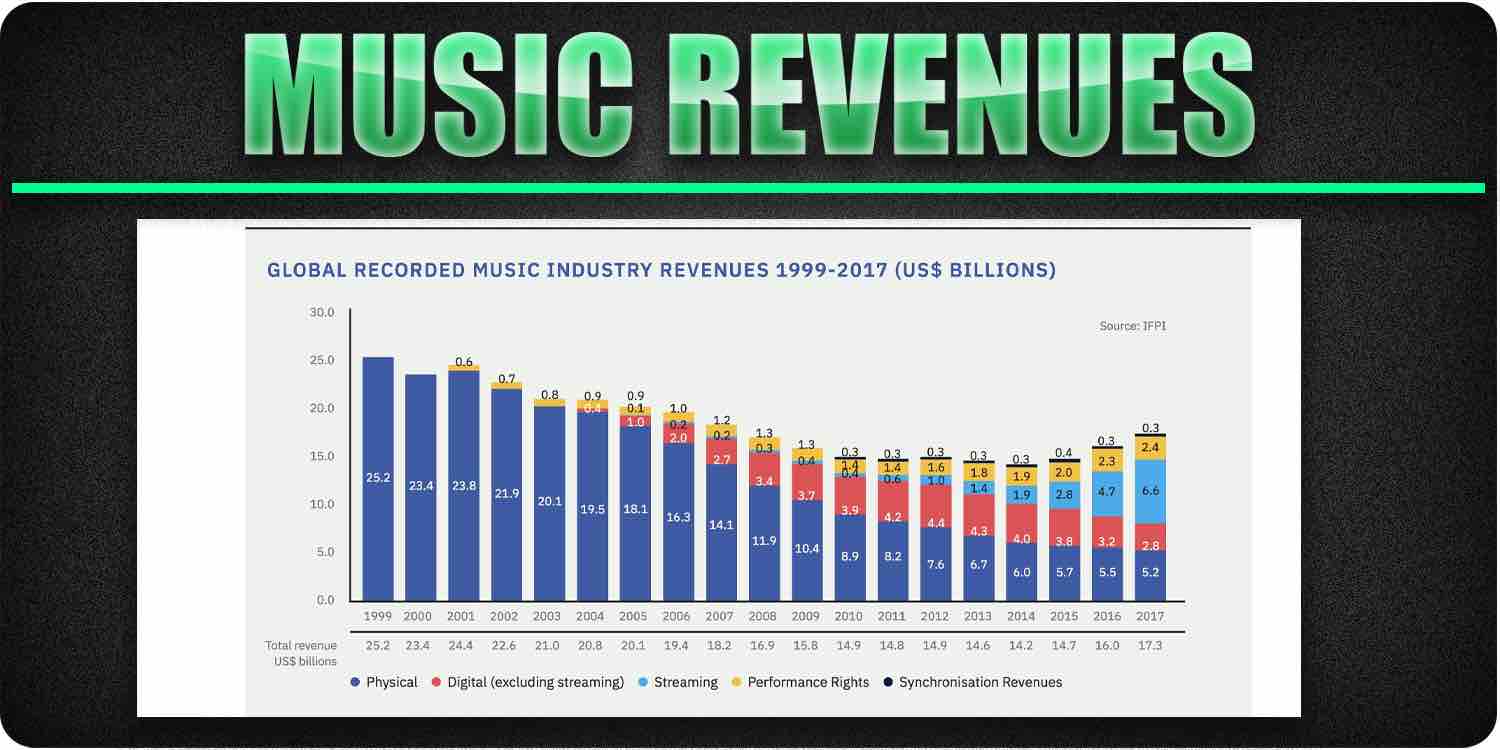 This in turn forces Spotify and other platforms to pay most artists very little in royalties, with the cost per stream going down consistently over the years.

How Much Does Spotify Pay Its Artists?

Let's dive into the nitty-gritty of how much Spotify really pays its artists nowadays.

The amount you get paid per stream fluctuates year over year, and by where your music is being streamed from.

These are the most recent payment rates of how much Spotify pays per stream in 2021:

And remember, this amount can get split to go to the record label, distributor or any other rights holders to your music.

This can result in little money left on the table for artists.

This is a pretty wide gap - some streams can be worth over 2x the money of others.

We'll go into more depth about how to get more valuable streams below, so you can get paid more from the streams your music gets.

As you can see, artists get little.

You should using the 15 Best Free Spotify Promotion Methods to increase stream count (and pay.)

The number of streams on any one of your songs needs to be quite high before you make any real money.

Especially when you consider that a band will need to split royalties with writers, publishers and songwriters.

The system Spotify has going is pretty straightforward and simple.

After all, they must pay out tens of thousands of artists every single month, so they must keep a streamlined system in place that is both easy for them to execute on and easy for you (the artist) to understand.

It's very simple - Spotify pays you whenever someone streams your song.

Spotify tracks all the streams you have and adds it to a grand total, to be paid out to you later.

What Does Spotify Count as a Stream?

Spotify only counts streams that last longer than 30 seconds on your song.

Their algorithms have gotten really good at detecting bot streams - so trying to grow your Spotify plays this way won't help (in fact, it can get your song or account taken down).

When your song gets played for 30 seconds or more, Spotify will count it.

The Cost Per Stream Greatly Fluctuates

As seen above, the pay per Spotify stream greatly fluctuates.

This is because the location where listeners are from directly affects how much you will get paid out to you.

A Spotify membership costs less in some parts of the world than others, making these listeners worth less per stream.

The streams that come from high-income areas such as North America, Europe and even parts of South America will yield the highest pay per stream.

Artists get paid less per stream if the listeners come from lower income countries such as India, the Philippines, etc.

When you run a Spotify promotion campaign, it's important to be aware of where the company will promote your song to.

How to Get More Money From Spotify

It's important you make music that grabs people's attention and is good enough to listen to the first 30 seconds.

Songs with long and drawn out intros usually perform badly on playlists and Spotify's algorithm tends to avoid songs of this nature.

Another way to get people to listen to a full 30 seconds or more of your track is to simply make good music.

Low quality music that isn't up to par with your favorite artists won't be listened to for more than 30 seconds, and Spotify's algorithm will also pick up on this.

Many artists overlook these somewhat obvious tips. But if you take them seriously you'll see a real improvement on your journey to earn money on Spotify.

Another key point is to focus on getting listens from high-income countries, as the fans from there are worth more per stream.

Royalty Payouts of Other Streaming Services

It's important to also know what other streaming apps are paying out in relation to Spotify's own streaming service.

Musicians might get paid more in royalties for the same number of listens on other platforms. 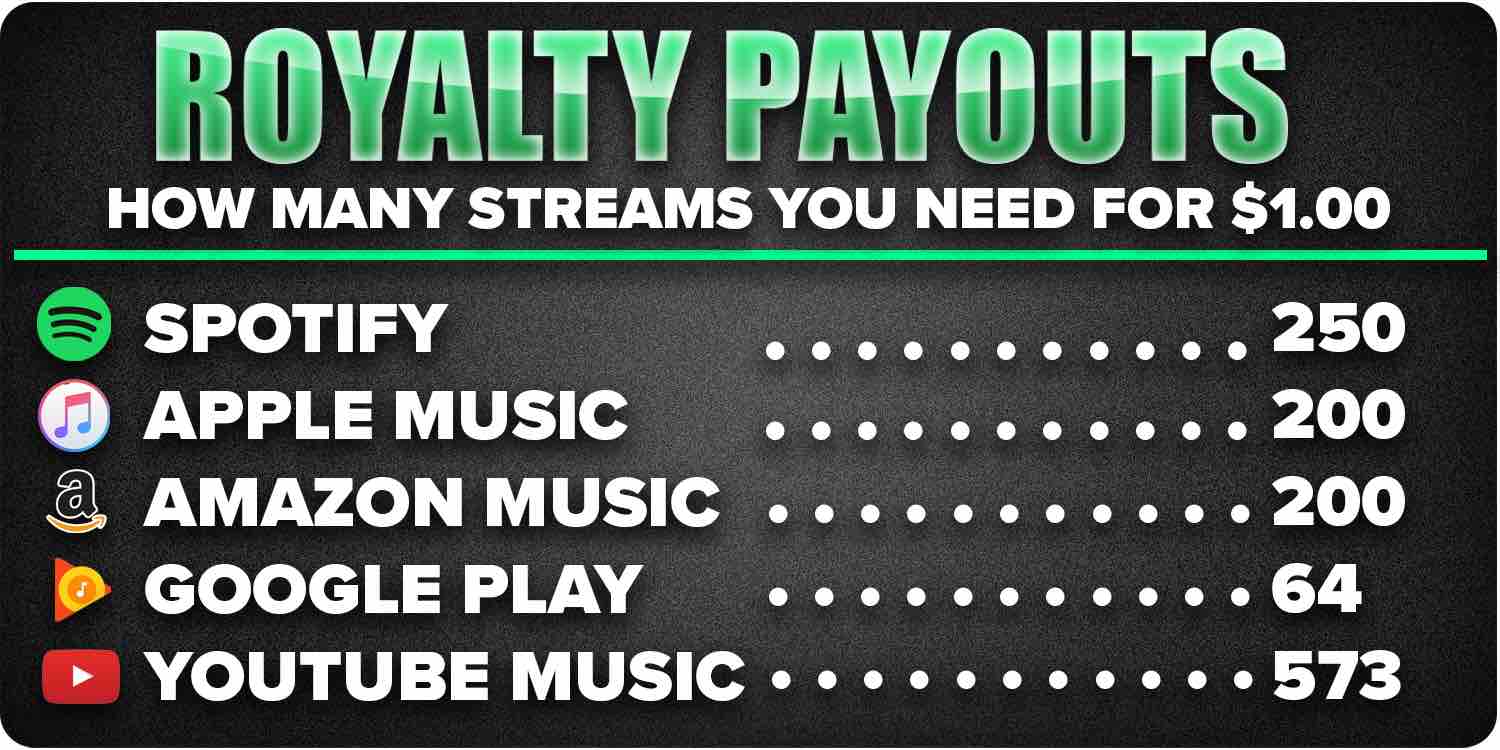 While many artists think that the amount paid on royalties is going down, Spotify is trying to make it more fair for creators.

While there is somewhat of an improvement, the reality is that it's still the big artists that take home the most, while those with a smaller fan base get left in the dust. 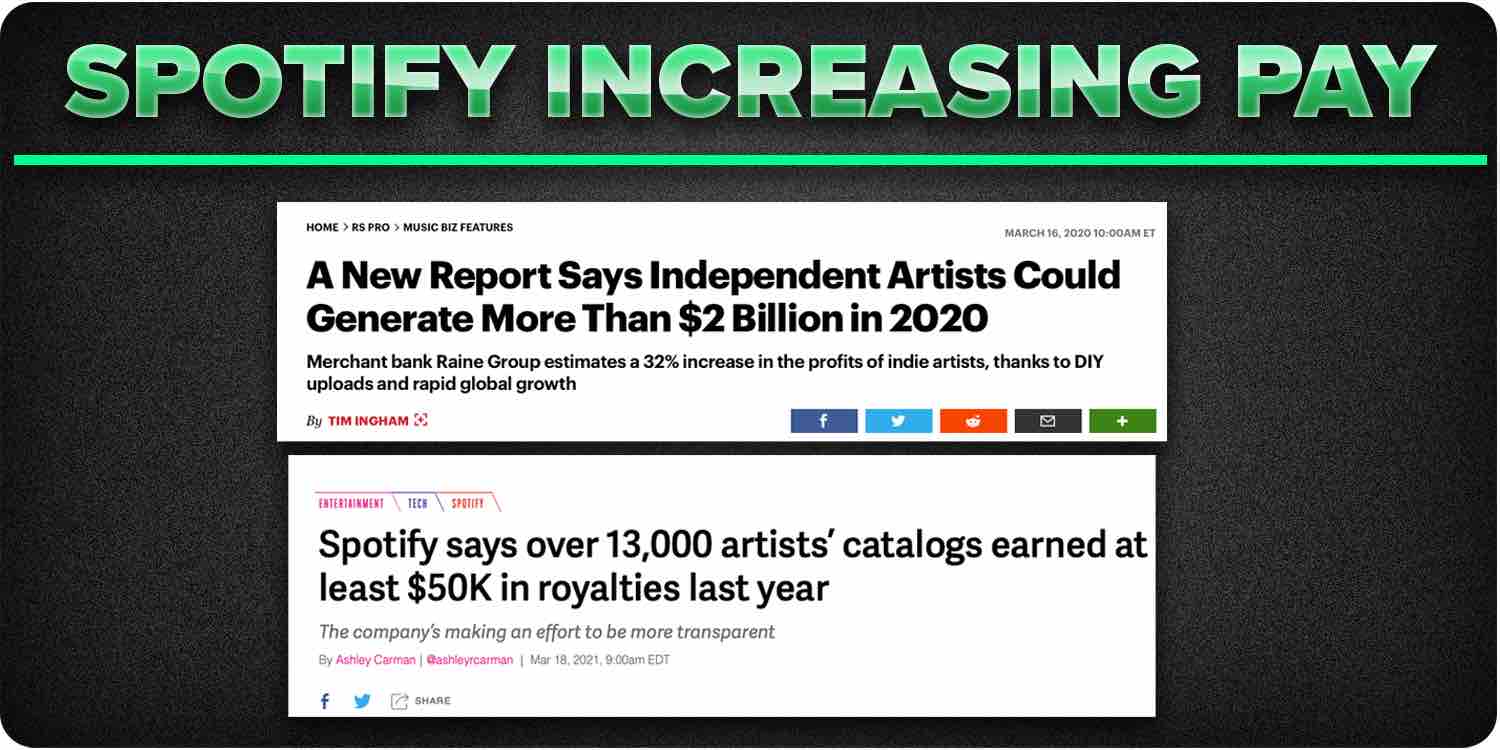 How to Get More Streams on Spotify

The next obvious question is - how do I increase my streams on Spotify, so I can get paid more in royalties?

The best way is to work with an established company that's worked with 10,000+ artists, such as Boost Collective.

Their Spotify promotion campaigns can get your songs real and organic streams that are optimized for maximum royalties.

You can check out their 350+ Spotify playlists and learn more about their campaigns here.

How to Actually Make Money as a Music Artist

The truth is, you're not going to make that much from Spotify alone. It's a good start, but the best way of making a living as musicians is to have multiple revenue streams.

Getting a song to a million streams on Spotify is a major achievement - and is very hard to do.

And yet, you'll only earn about $4,000 from Spotify for this (assuming you released independently and have no record label taking a cut).

Making income from multiple methods is key if you're an artist.

Live events are probably one of the best ways you or your band can make real money.

Performing at local venues, weddings, clubs and other public events will help you start earning. As an added bonus, you get your music played in a live setting!

At the same time, making physical CD copies of your album and putting them for sale on your website or at your gigs can also get you some more cash.

Especially if you make the CD a 'collector's item', with some unique art or something of that nature. It can be a great way to get your best fans engaged.

For your next release, it's also a good idea to make merch related with the cover art of it, or your artist brand.

To sum up, uploading one song or album on Spotify and having people streaming it won't make that much money.

Royalties for the most part will only start to accumulate once you hit hundreds of thousands of streams.

It's best to leverage your songs towards your other streams of income that need to be built up.

Make a site, sell merch, CDs, or tickets to your shows, create your own parties and make it paid admission, or anything else.

These are all great ways to make cash that'll grow the total number you'll be making.

Musicians will ultimately prosper the most when they make money from their own brand, rather than trying to get Spotify to pay them.