How Much Money Do Producers Make Per Beat?

Here's how much money producers make per beat

You'll be shocked to know how much money do producers make per beat.

Here are some ways to earn additional income as a music producer:

Aside from simply making beats - there is real money to be made for a music producer that works closely with musicians in the studio.

Sure, you can continue to get paid for the beats that are produced by you...

But it's important to have multiple streams of income.

This separates your audio product from being a job employee VS a biz owner.

Aside from music production, I urge you to try every single one of these and see how you can better monetize in the music industry.

Music Producers Can Set Their Prices To Anything

The great thing about music producers is that you can make as much as you want in the hip hop music industry.

That's the benefit of being a producer!

Most producers have zero fan base zero marketing experience.

That said there are a few things music producers should take into account when set setting their music production sales price:

How should music producers charge their beats?

Your earnings can depend a lot on these.

Make more money by making your own beat website

You can also make your own beat marketplace where you have full control of what you sell and how you sell it.

This is a step up from using places like BeatStars since you're not tied to someone else's platform.

Nowadays, there are easy-to-use drag and drop builders and features that make building your own website much easier than even a few years ago. 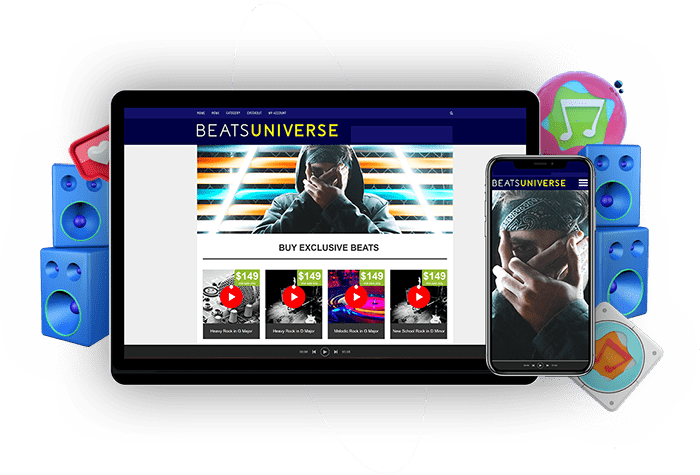 Check out the Gemtracks builder here.

Producer Profit: Factor In Your Cost Of Music Production

In the music industry, it's essential to make money.

A music producer should always think of different ways to profit in the music business.

This means that your revenue MUST exceed your expenses!

Music production costs to look out for:

Once you add these all together then you'll have a final gross cost.

Assuming your goal is to sell 100 beat licenses this year: you should divide the gross expense cost by the number of beats you're selling as a producer.

This is the average cost per unit.

A good producer is going to charge their beat price at 50-100% margin, at the beginning of his music production career.

Of course the more units you can sell as a music producer, only does your average cost per unit decreases but you can get away with a higher sales price!

This is common music business 101 but many music producers seem to neglect this fact and struggle to become a full-time music producer.

Furthermore, The number one thing a music producer needs to understand is the lifetime value of a client.

If you're sick of sending a lot on music marketing...

Get your own music studio booth (for under $500)

This image above (with the portable music studio) ☝️ is the BEST resource for musicians!

It's astonishing that such a sizable booth can be folded up and moved with such ease, then re-erected anywhere you choose using a home recording booth.
Buying this $450 booth saves you thousands in studio time fees.
Here are the benefits of this portable music studio:

The goal of every recording session is to capture a dry, noise-free signal, and a portable voice booth is the perfect tool for doing just that!
Instead of having a voice booth permanently set up in a studio, you can simply fold it up and put it away when you're done using it.

Ever since my producer bought one of these... Life became 100x better.

Just tap here to learn more - this might just be for you!

Sell More Beats As A Producer

Are you a music producer that wants to start making money?

You're in luck. The reality is: there are billions of dollars in the music scene!

Musicians are rising, getting their track heard by millions of fans.

It's the small-time artists we least expect that end up with music success.

See, whether it's in hip hop or any other genre in the world, these musicians need help producing their next breakout track.

(Use this Free Producer Tag Generator to get your beat tag!)

If you wonder how you can take your music-producing talents and use that as an audio product to make an average salary in the music space - this blog is for you.

The most important thing for a music producer is to have a high client lifetime value.

What exactly does that mean?

To keep it simple - music producers make the most money from very few of their clients.

You'll find this not only in the music industry but in practically any business.

This is called a Pareto principle,

Music producers need to understand this fundamental principle in order to optimize your beat sales price so that you can get repeat customers!

For example: let's say you're making music for a major artist at a record label.

This means that your sales price will be higher but ALSO if you can execute on the results given the most amazing recording process and do the best music production...

The record label and major artist might not hire you again for your music production services.

If it's a hit record then I'm going to use other high-profile music producers.

Let's look at it on the other side.

Let's say you do music production for clients whose artist's levels are lower. If you sell a beat every three months to artists for $200, then that's about $800 a year.

The difference here is - those artists are more than likely to continue buying from you year after year.

After about four years then you've made $3200. Most producers try to chase large placements and miss out on lifetime value.

If you can optimize their lifetime value then you can expect to earn as a music producer!

It cost money to make money - it's all true to your career as a music producer.

That being said, your largest asset is your collection of beats that you can sell.

I found that a great way for a music producer to sell more audio products is to go ahead and host a giveaway.

When a music producer host a mask giveaway they advertise and promote the hell out of it!

In case of such as this, they are giving out pretty huge prizes, perhaps a microphone or even recording equipment.

When is a consistent giveaway, it's usually something small (like 5 free beats.)

With the consistent giveaway, you don't promote it harshly.

Rather, you keep the giveaway link somewhere on your social media profiles for a new artist to check in and get closer in your funnels.

The cool thing about the giveaway is that it gives you access to a bunch of new artists!

You're collecting their emails and then it allows you to sell your music production services to them later on.

Once they're in your system you can then get the most lifetime value out of the artists!

Selling Your Exclusive Beats To A Major Record Company Artist

Do you want to increase the average sales price for your music production services?

If so, you should consider exclusive licenses.

That's how Scott Storch makes a bulk of his music producer income.

Every major record company in the music industry prefers to use hip hop exclusives rather than unlimited beat licenses.

Imagine if Your Custom Producer Tag was on a Drake song...

This is because the music industry is competitive.

Labels do not want other hip hop artists to get on that beat and siphon away potential record royalty income from them.

Note: regardless of your exclusive sales price, the label will always be making money in the long run.

The thing about exclusive is that as a music producer you need to negotiate the artist on what a decent rate is.

If you're starting off then sadly your music production services will not be as highly valued as if you were in the game and had many placements under your belt.

A cool thing about the exclusive license is that not only is the music producer earning based on a flat fee - but music produces make record royalty income as well.

The reason why these incentives are so high is that the record company doesn't want anybody else to have access to the beat.

It's great because music producers make bonus percentage points based on the record's sales price.

The more the record can sell, the more your get. paid for your music production.

What typical music producers do is:

It's smart to get an entertainment attorney.

they should review any exclusive license you have.

Not only can they help you negotiate a higher percentage of artist's royalties, but your attorney will make sure that the flat fee you offer is fair.

I urge all new producers to get an attorney.

This goes whether you're a good producer already, or a novice.

Your entertainment attorney is going to make sure that you don't get the short end of a stick.

Any opportunity where a label can have music producers work for less money, they will take it!

One of the biggest questions everybody asks themselves this:

In your music production journey, you'll have to decide which path you want to go.

The benefit of holding music assets is that it generally appreciates.

Every label's largest asset is its catalog.

These labels sell these record catalogs often to other labels - who want to make record royalty income through publishing deals.

Many artists sell off their catalogs!

You'll be surprised by these record's sales price - millions to tens of millions of dollars.

If your Music production is tied to the master recording of the song, you'll be earning royalties regardless of who owns the song.

This is why you need to own your masters!

I hope you now know how much money do producers make per beat?