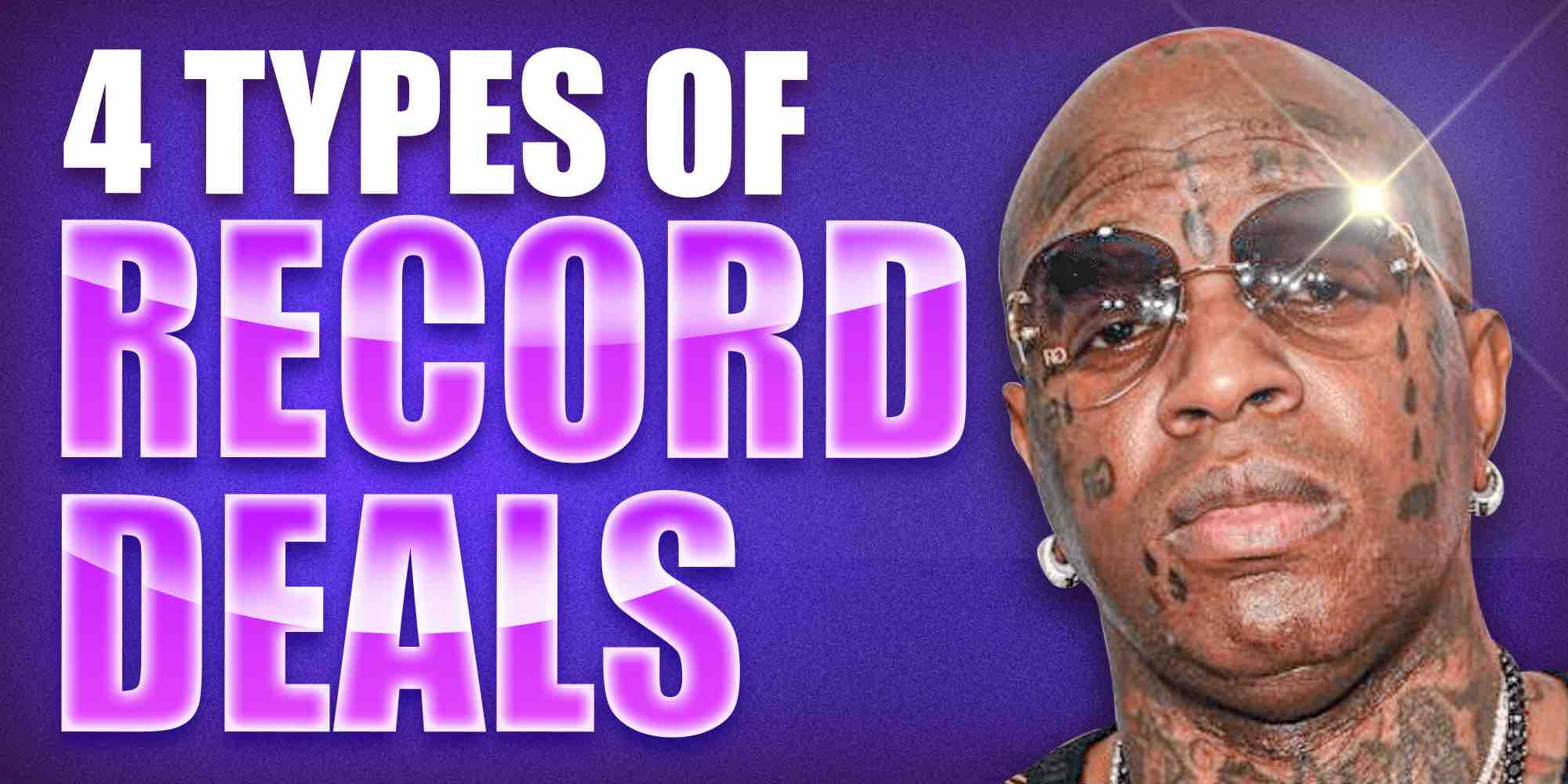 Ever wondered - which record deal is most ideal for me as an independent artist?

It really seems like there are ENDLESS options when it comes to music sales...

Like, what the heck is the difference between a production deal and a distribution deals, to begin with!

(Note: it's larger than you may think by the way.)

So that leaves us wondering: how do major label artists get a recording and how you can do the same?

In this blog, you're going to find out.

You'll learn these aspects of a record deal:

Your record deal is awaiting you.

Firstly, there are many types of record deals

Not all record deals are the same.

In fact, almost every label offers many varieties of record deals.

This makes a lot of sense considering major labels have different genres of music. 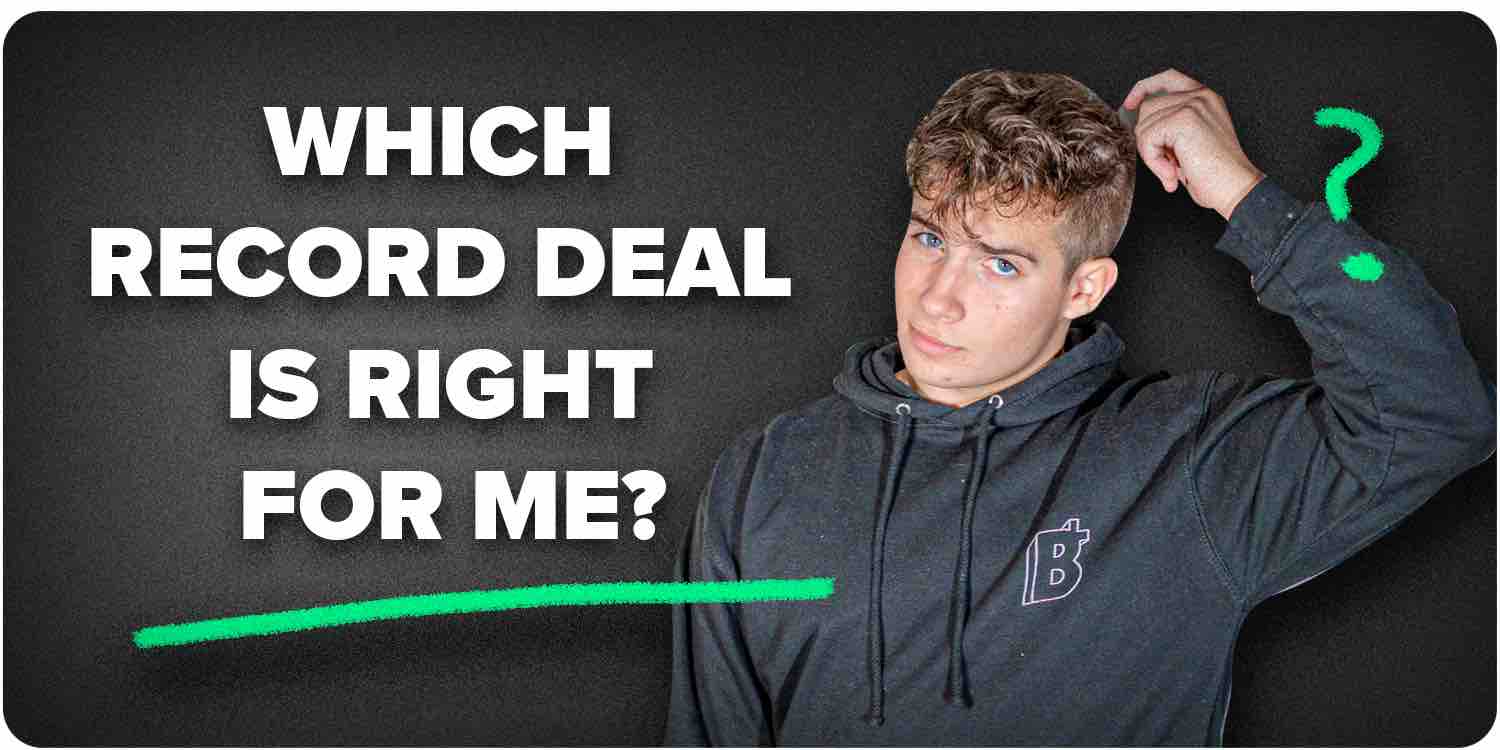 Take note: the more difficult a music genre composition is to create, the more complex a record agreement contract will be.

This is because labels will have to offer more studio time, promotion agreements & marketing help to get it heard.

Commerical tracks are much easier to sell.

For example: If you make electronic music.

Most EDM can be replicated on an iPhone with the Garageband app.

In this case, you'll be better with distribution deals using small a indie label rather than embarking on a huge production deal with a label.

However, if you're in a rock band... Samples can't replicate the original guitar quality sadly.

In this case, a record label pays a lot of money just to get you the best audio recording equipment.

This is to produce the best finished product imaginable!

Summary: not all labels are equal, select accordingly.

There's more than one type of different deals that you can choose from.

Major label artists are not stupid - they know the danger of getting a record deal.

Due to the added pressure to improve recording contracts, a new type of profit split deal must be made.

They can be, but are not limited to: 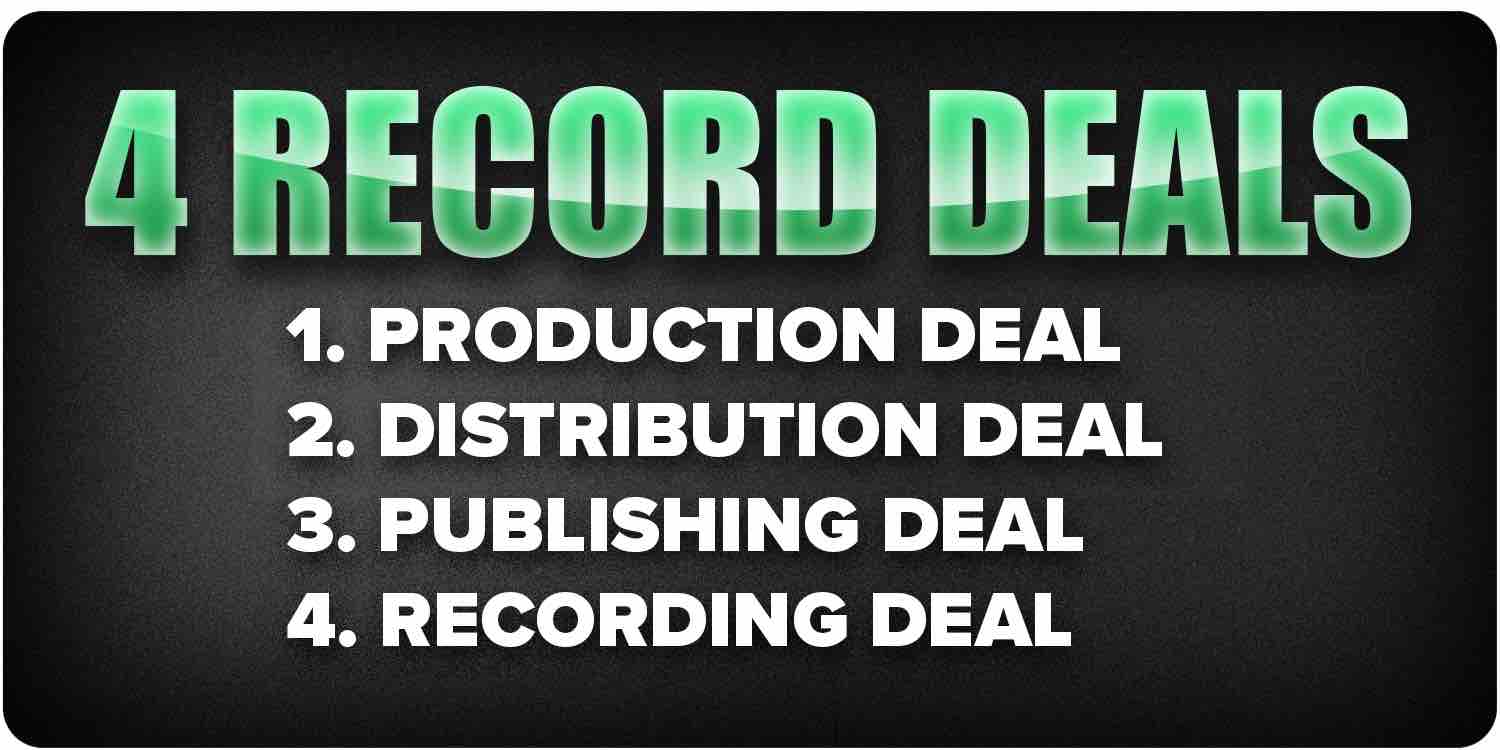 A publishing deal is done with a publishing firm, which a label often owns.

There are many publishing deals you can make.

Before I hop into the wonders of how a record deal works, it's important that you have a base understanding of how music copyright works in relation to a record company.

Please, get an entertainment lawyer by all means.

You can't be signing just any agreement contract that comes your way. Sign carefully.

I need to reiterate that there are two types of copyrights in the industry: 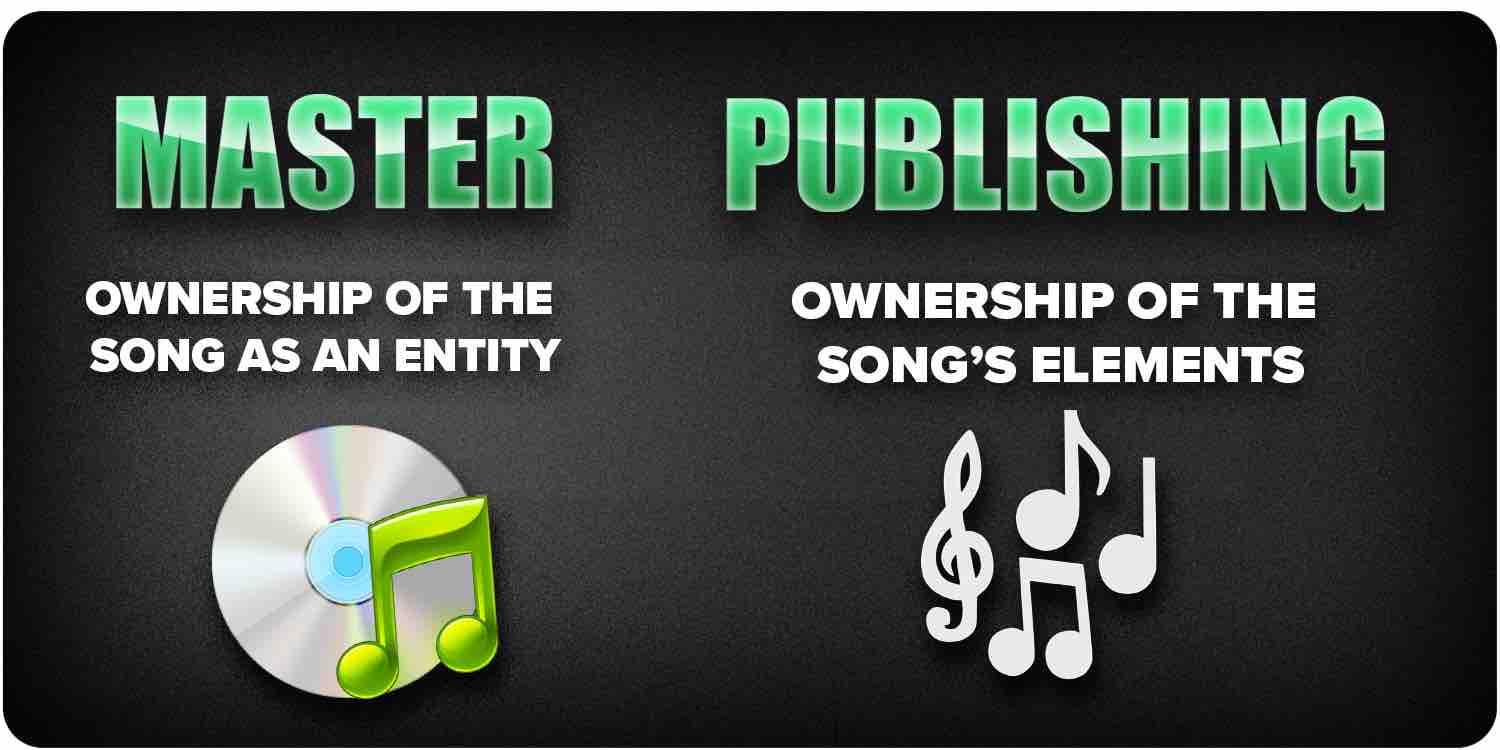 To break it down - the master right is the right to the completed record (the master refers to final version of the track).

The composition rights are the rights to the song elements (lyrics melodies, vocals, etc.)

If you sign a huge label deal with a large advance, they will most likely own the master rights.

The trade-off for working with a huge record label is that can keep your composition rights (choose where to publish the song.)

Through this, you'll still be able to utilize your music to monetize in alternative methods when you sign with a label.

Record deal logistics can be complicated so make sure you read before you sign!

How to navigate music law without an entertainment lawyer

Of course, not all artists have a trusted entertainment lawyer to go to.

In these cases, you'll need one to maintain creative control and fight to retain your master recordings!

What if you're offered a hefty advance that may potentially be the best deal of all time...

Getting advice from an entertainment lawyer before you sign is essential.

If you don't have an entertainment lawyer these are the steps you can take to protect yourself from crappy contracts:

The most important thing is to act as your own entertainment lawyer.

If you're getting a hefty advance then it's important to seek out an official entertainment lawyer rather than fighting for your master recording single-handedly.

That said you should understand where your finished product is going in order to manage the contract agreement with most Finesse.

how does a record advance work

The conventional record deal is pretty simple. (That said I still want you to get an entertainment lawyer!)

I won't go deep in the breakdown of a record deal agreement contract.

I don't want you to fall asleep reading this.

The most important thing to know is that a major label will give you a large advance on your future royalty earnings.

This means that you owe your record sales money back to the record label. 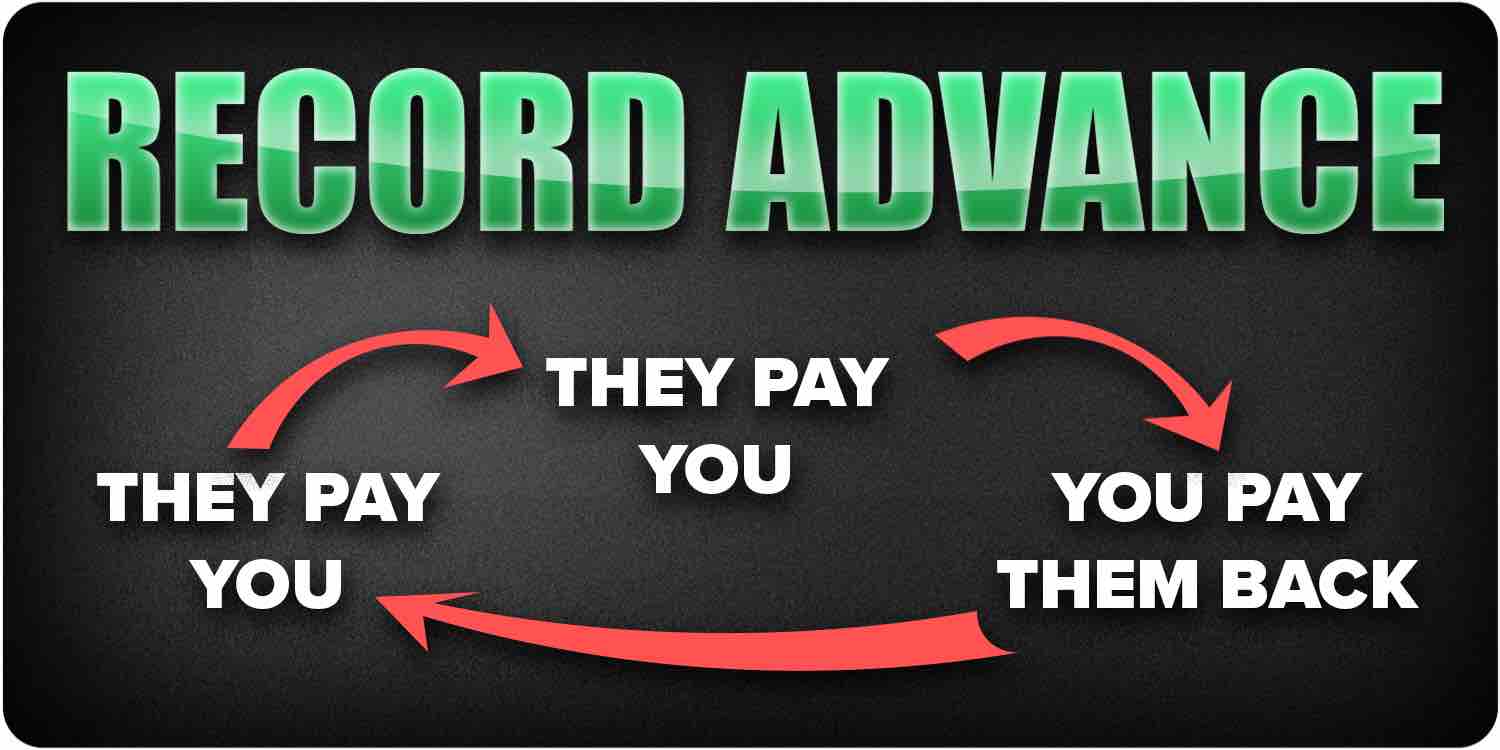 All recording contracts are different but the main premise is that the hefty advance means you won't own the master recordings nor have full creative control.

A record deal advance is not all sunshine and rainbows though because in many cases the artist may need to pay for their own investments with the advance money.

This can range from:

It can take a lot of money to make really good records, and not see any profit when you do end up selling them.

Due to the fact that record labels on your masters, almost every major label artist makes their money through having concerts and selling merch.

This is attached with the major label artist brand and not necessarily with the music itself.

What is a 360 deal in the music industry?

Most artists are scared of working with record labels simply because of 360 record deals.

And trust me... You want to stay as far away from a 360 major label deal if you can.

This type of record deal is so notorious.

We've all heard horror stories of record companies taking advantage of new artists by setting them up with an extremely bad deal that compromises full control of their entire music business.

With a 360 major label deal the pay structure is set up so the artist is practically an employee for the major label.

If you want to go touring or sell additional products to monetize an artist... The 360 deal will take a cut. 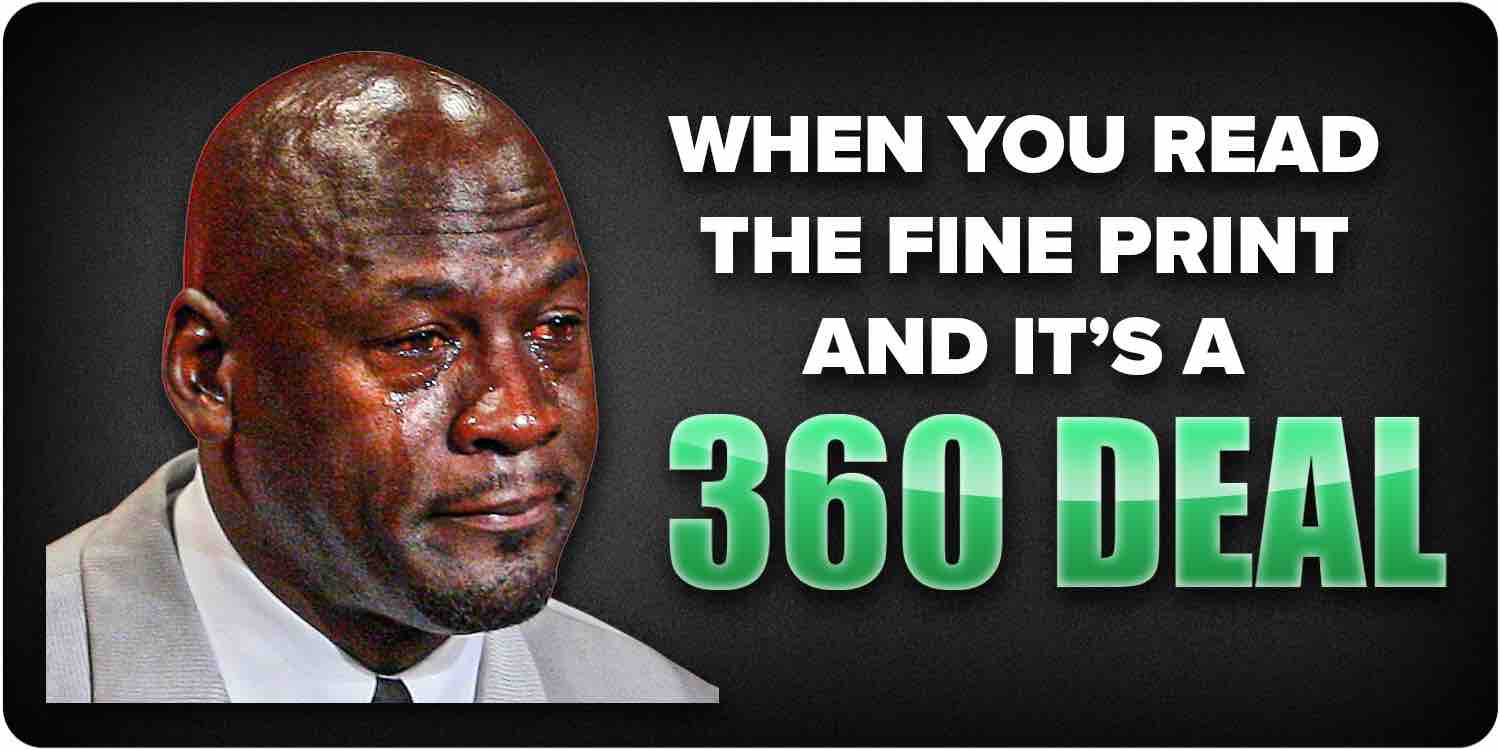 This sucks because merch and touring the number on the way a label artist could profit after paying back their big advance to the record label.

The record labels have their hands in every potential revenue stream.

The artist not only sacrifices the royalty rate but you will not be able to make as much from touring and merch sales.

Which type of record deal is best for you?

Do you want to work with a record label at some point?

Most rappers would dream of getting contacts with major labels!

There are many different types of record deals and depending on which record labels you want to work with you'll have to consider all the variable options.

One thing to keep in mind is that most major labels only reserve specific deals for artists that are already breaking out.

To be a real music industry player you need to know which type of music label deal is best for you.

Not only will this help you to optimize your music sales but if I can help you set record contracts that are fair for both the record label as well as you,

Should you use an indie label as an independent artist?

The first thing any info that artists such as yourself should consider is.. "how about if I use an indie label?"

It's a smart idea to read about indie labels!

The majority of indie labels are not in fact real record labels - they don't handle the marketing, promotion, nor offer a big advance.

Instead, they go to trusted Promotion firms such as Boost Collective for promotional materials.

Whether you want a large advance is not important in most cases.

That said, the support you get from any labels is a lot smaller than you may think.

This makes sense because an indie label generally has a larger catalog of independent artists who work with them.

In other words, you may be better off just hiring an excellent music marketing firm such as Boost Collective rather than signing off your rights to small indie labels.

Indie labels don't take large cuts though, which is nice.

Still, on an indie label you're getting a profit split deal, meaning that you're still getting only a cut of your royalty rate rather than the complete money amount.

This is a cut from your composition rights, so you get to keep your masters though.

Distribution deals are one of the best methods for independent artists to get heard.

This is how NLE Choppa gets his music to his fans.

In other words, it's the best deal for artists since you don't sign off your rights in the agreement contract.

A distribution deal is where the company just helps get it on major stores and puts in marketing efforts to get the best promotion.

Services such as distro kid and alternative distribution alliance are designed to get to the best distribution deal.

This is different from a production deal where they actually help you create the song recording.

In a production deal scenario, they'll either offer a big advance or take a cut from the royalty rate in exchange for studio time and handling other expenses that deal with creating a final recording.

Recording costs are not cheap which is why production deals are extremely attractive.

Michael Jackson would use a production deal.

The most important thing is to sign a contract agreement for only a single record out of time.

Avoid any contract agreement that binds you with a specific label for multiple projects or multiple years.

How to keep recording costs low

The largest value the label can provide is giving you amazing master recordings.

The only issue is in return they expect to "invest in you"... In other words on your recording contract.

This way I urge you to stay independent greater all music videos and book your own time in the studio to record an album.

You can form an agreement with your studio engineer to have a payback plan if you don't have the funds for an entire album release.

If you can also coordinate with other artists to share equipment, you can cut many other expenses down.

This is why networking is key!

(Of course, doesn't hurt if you have a trusted entertainment lawyer as well.)

The whole point of a record deal is to propel your music CAREER further.

Always consider that as an independent artist.

Through record labels you most likely not get as many record sales as you think you will.

This is because the record labels pays you only a portion of Music sales rather than the full amount.

Your best pay structure is to use the label as a publishing company and set up a distribution deal.

Just keep in mind that this recording contract will not include marketing for your release as well if you are an indie artist.

You should get a single deal with an indie label such as Amuse: 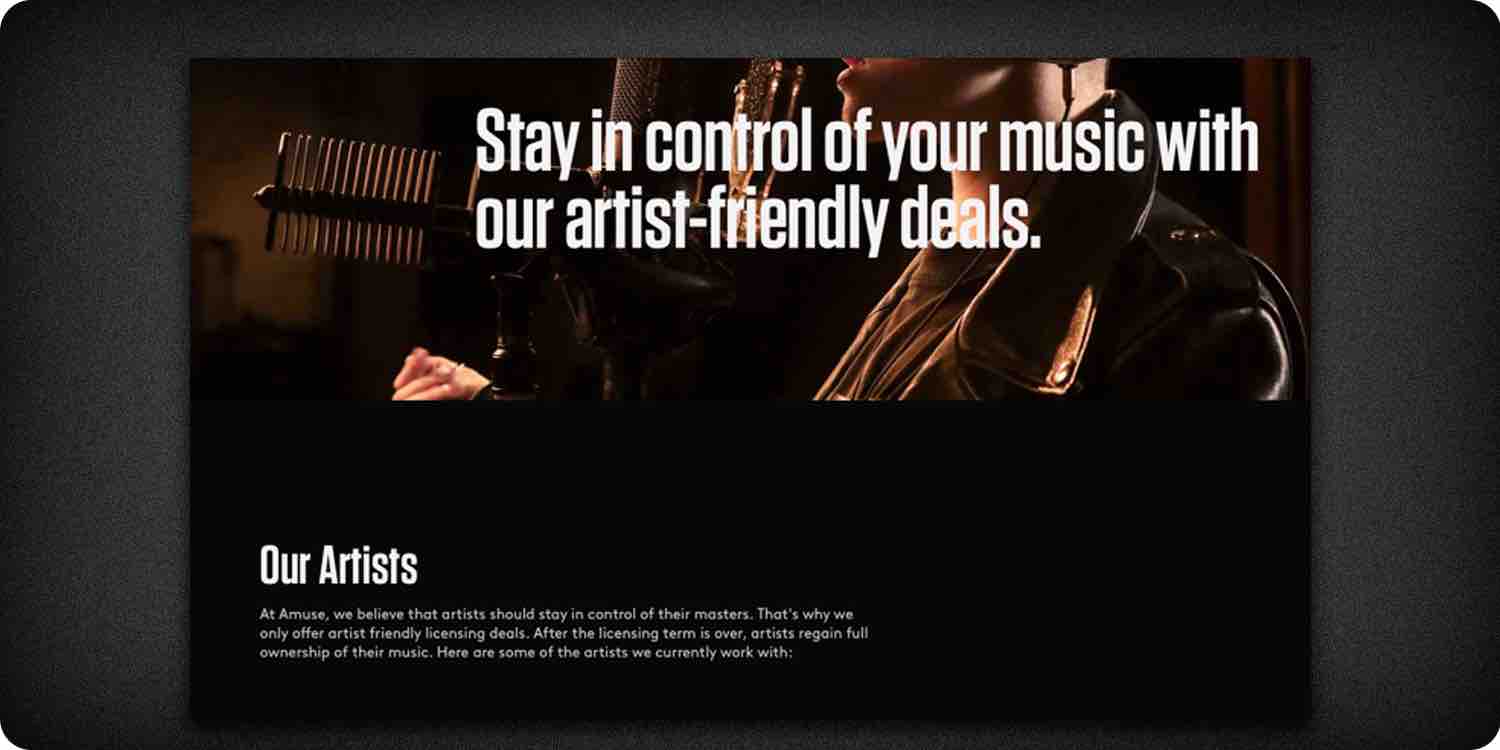 It's not designed for your label artist however it's a great way for an independent artist to generate music sales through a distribution deal.