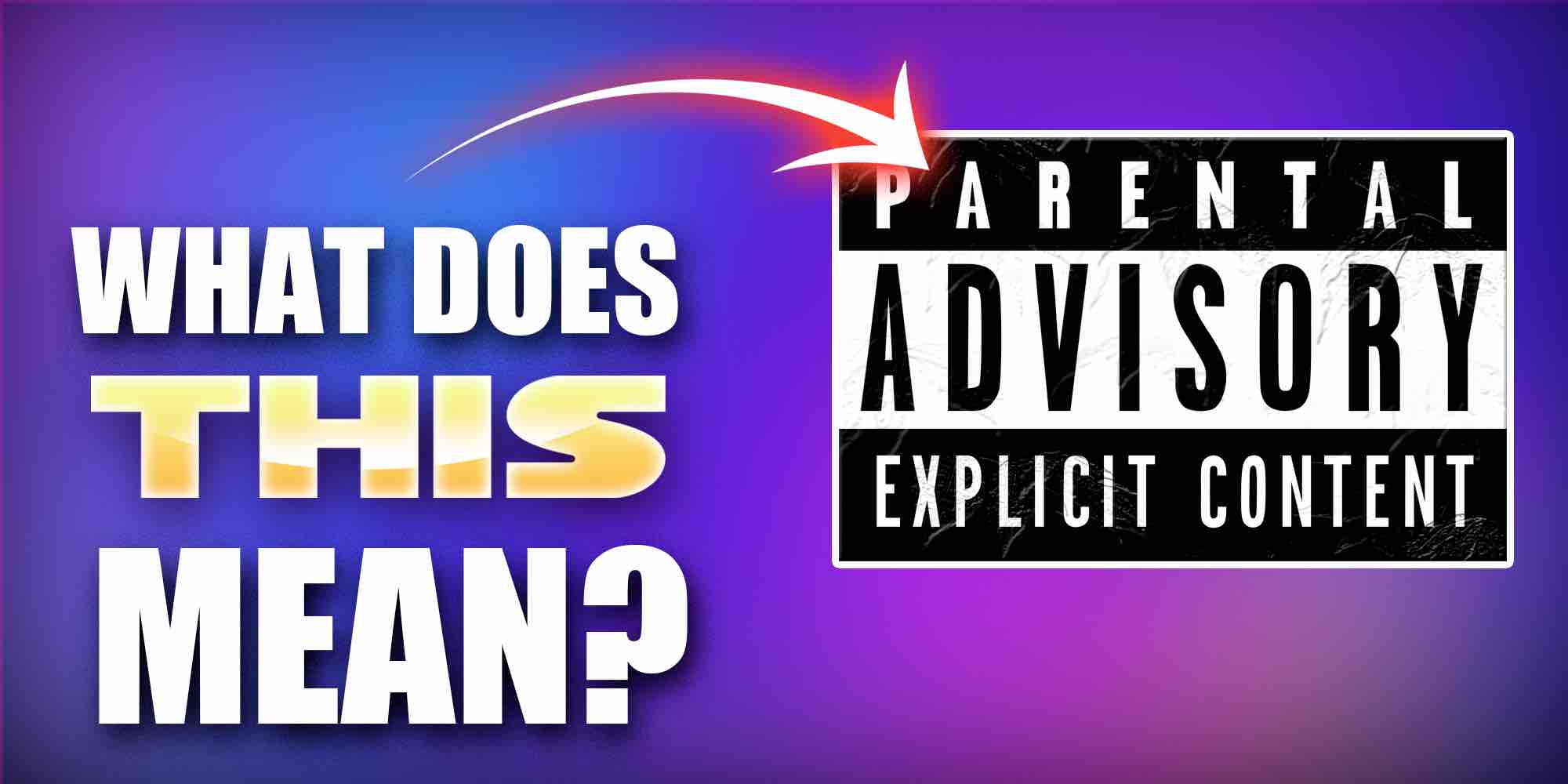 According to Merriam Webster dictionary, this is explicit content:

Explicit denotes being very clear and complete without vagueness, implication, or ambiguity.

When something is said to be explicit, there is no question as to what is being expressed or conveyed—nothing is implied or assumed.

It is denoted from the word explicit, in latin: explicitus.

An explicit song is not suitable for children, just leaving the implicit meaning out.

Most public materials avoid explicity at all cost, to maintain broad appeal. 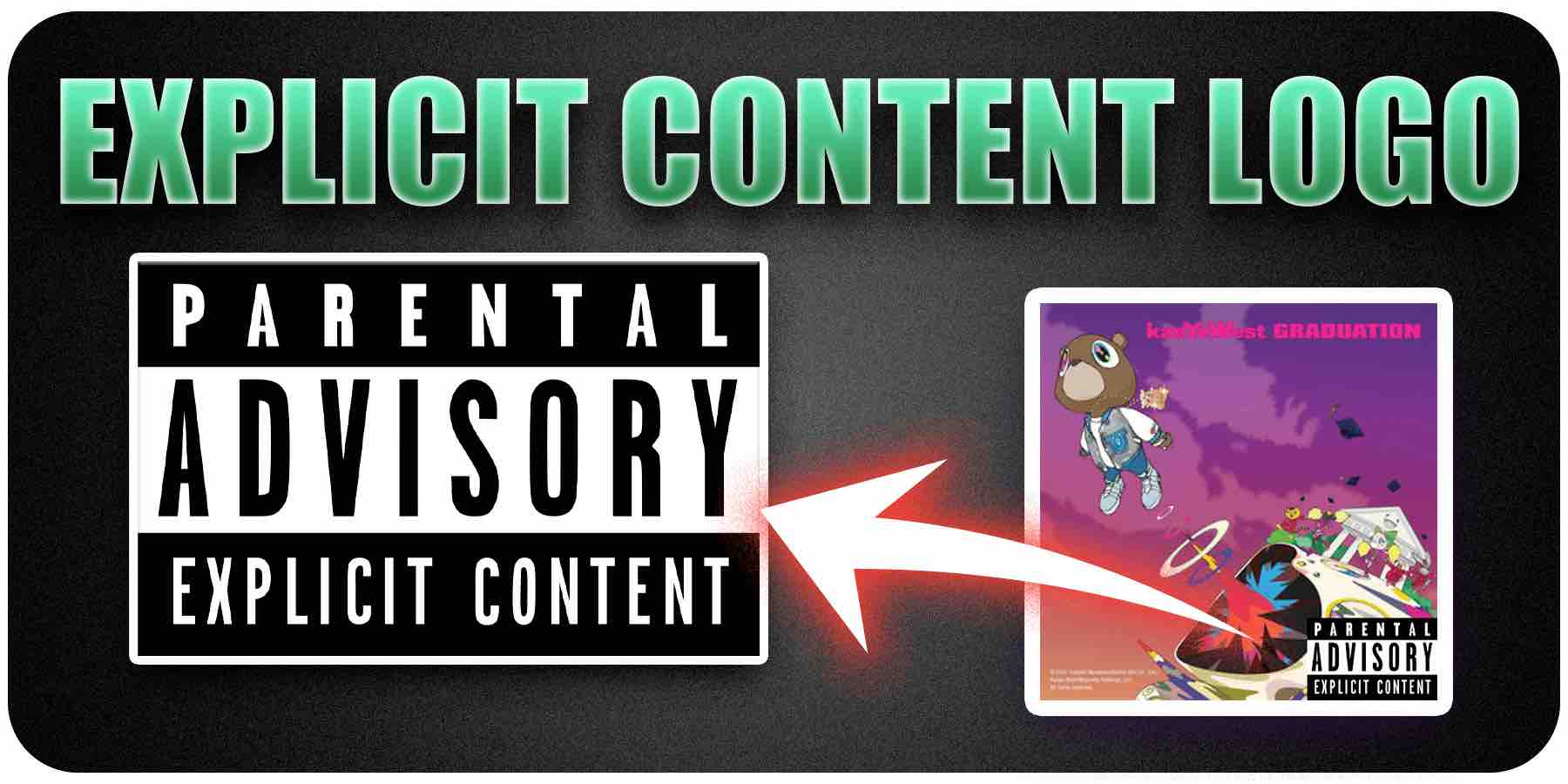 the explicit logo is iconic, you can see it in all the tracks containing an explicit type of content.

You'd hear this discriminatory language in early Typer the Creator songs all the time.

As a society, we change the definition and meaning of what is considered explicit often.

Parental advisory labels (or parental advisory stickers) are an American invention, created in 1985. They are intended to warn parents that a given album contains explicit lyrics.

But what does this really mean?

Every other country has its own way of warning adults about the content of their music.

In the United Kingdom, for example, the records industry uses a different system to identify releases with explicit content.

They assign a rating from 1-3 based on the level of expletives in the lyrics.

This is all done by the British Phonographic Industry (BPI).

In America, however, it’s up to other organizations such as RIAA or ASCAP (American Society of Composers Authors and Publishers) to decide if an album should have a parental advisory label. 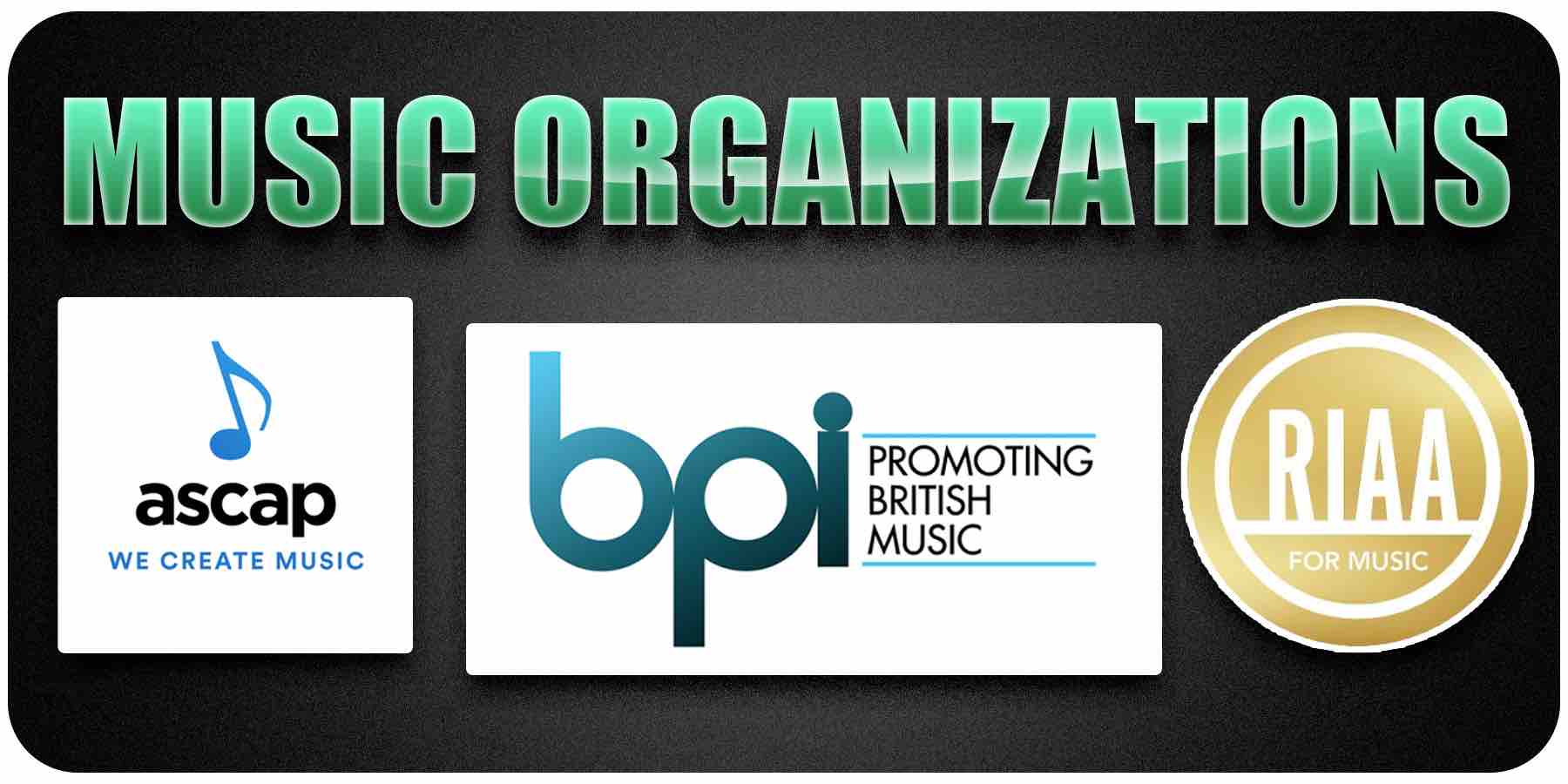 These are basically organizations that manage strong language and how much can be expressed through media.

The Uzbekistan iTunes Territories have different statutes for sentences and references containing explicitly made content.

The dictionary definition is not always used.

Even if the song has implicit physical threats included, so long as the violence isn't mentioned with explicity then the artist is fine.

This has changed the slang used every in rap song.

It should also be noted that not all albums with parental advisory labels are explicit by the above definition.

An album may have a parental advisory warning due to profanity and offensive language without containing any sexual content or nudity.

Moreover, an album may also have a parental advisory warning due to an abundance of sexually explicit content without any other violations (e.g., Too $hort's Short Dog's In The House).

The reason why there are various levels of advisory labels has to do with the lyrics.

The next level up on the scale is an “Warning Explicit Content” label, which is given to albums with explicit lyrics in at least half of the songs on it.

This isn't very common to see though (those types of records never sell nor see the light of day.)

Every university/school or physical government office only plays clean music.

Brands are increasingly interested in partnering with influencers who have a following.

But what if your content isn't appropriate for brands?

Brands need to maintain their reputation and what their customers expect from them.

How to define "explicit" lyrics

The term "explicit content" is often mistaken as meaning pornographic, offensive, or obscene.

Explicit content can also include profanity, violence, and other adult concepts. The key distinction is to understand that explicit content will not typically be appropriate for children. 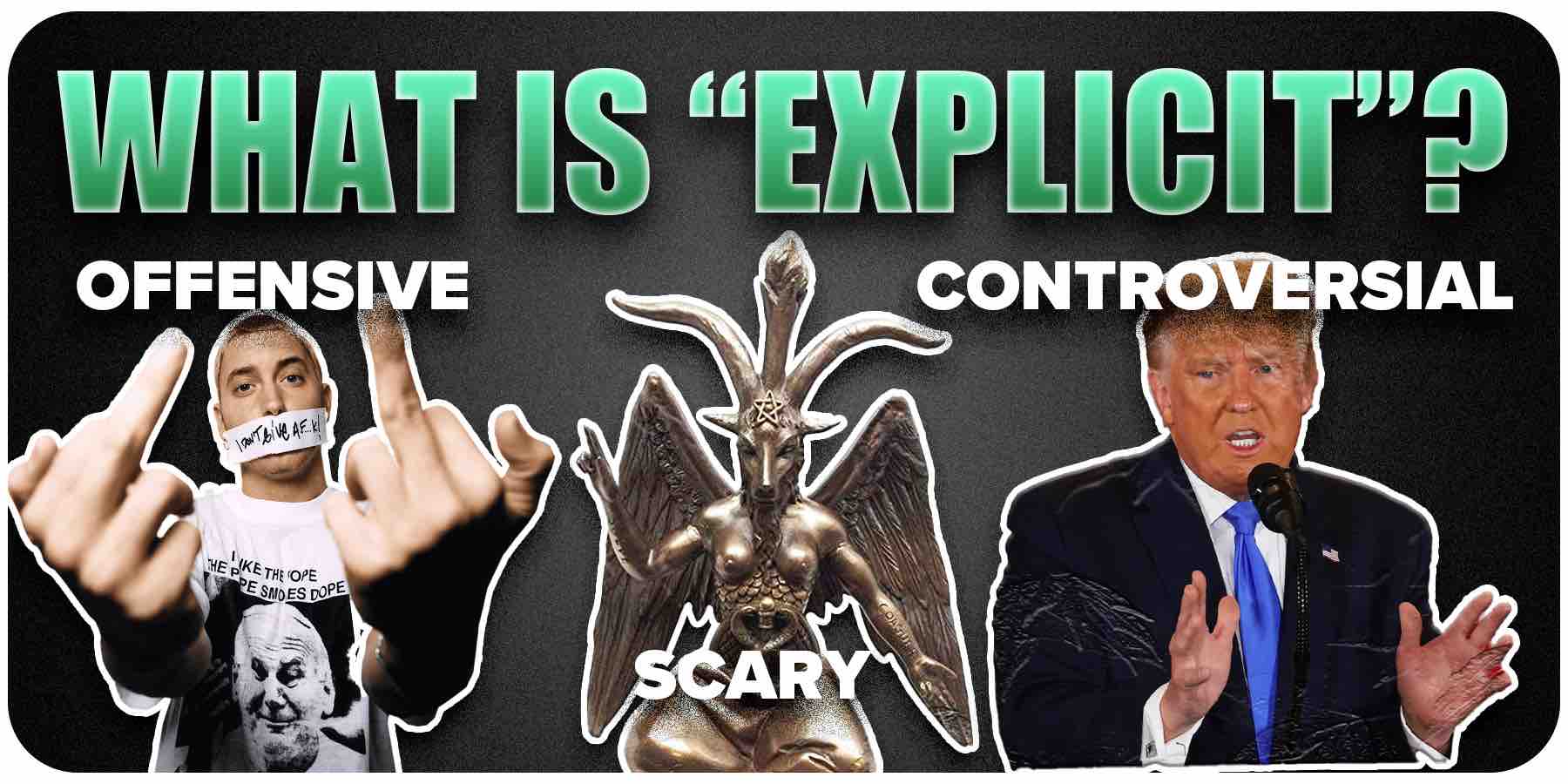 What is considered "offensive" can change depending on culture and society. One word and one track can be considered offensive one year, and a joke the next.

Every movie deemed controversial has gone through this.

Some scenes are marked unsuitable for children.

These can lead to the parental advisory explicit content label.

(I doubt you're reading this subject about education LOL.)

Explicit instructions is the intentional and systematic preparation of students for learning tasks in order to maximize student achievement.

This allows them to become more self-sufficient and independent learners.

It has literally nothing to do with music.

It typically combines direct teaching, modeling, and scaffolding with a focus on explicit objectives that are broken down into concrete steps with success criteria.

Radio stations have always been a place for people to come and hear new releases, top-chart songs, and enjoy interviews with the hottest stars.

However, an aspect of radio that's become more prominent in recent years is a policy against swearing.

Radio stations can get fined for saying an offensive statement.

This was such a common legal system people would abuse.

Now, the modern radio process bans any one word which makes them legally liable.

The reasoning behind this policy is that some people may be offended.

It's a general rule of thumb that you should always try to avoid offending people.

This rule may be flawed in the sense that there are other things more offensive than swearing on the airwaves...

Violence and sex is still implicit in the music. The difference is the way they form the sentences.

The idea is that if you're not happy with hearing a station host curse, you can simply change the channel or turn off your radio.

Some DJs have taken to mocking this rule by speaking in gibberish, while others think it's unfair considering there are other things that are worse than swearing on the airwaves.

It's not a definite thing, so each person is entitled to their opinion of what is "unsuitable"

What do you think?

By separating content and making sure you're only posting what is appropriate, you can protect your brand from any negative attention.

You also won't have to worry about your family coming across posts and feeling uncomfortable or embarrassed.

This can cause major issues with your relationship with them and ultimately affect your business's success.

Should radios uncensored have explicit music?

This is a tough question because the language has always been an important part of music.

Music was once considered to be just vocals and lyrics but now it's much more - it's the sound of the artist as well.

The language they use or don't use can enhance an experience or change the mood entirely.

An entire release can have references to explicitly worded contents.

When you listen to a song without words, you might not understand the feeling that is being conveyed in that song.

Rap is all about deeper meaning, so every sentence/references matter.

And if we take away from them their ability to swear then we're depriving them of their freedom of expression..

Which is something we should never do as artists and listeners alike.

The track is not the same when censored.

However, there are some great points about no-swearing policies: it keeps listeners from hearing words they may not want to hear over and over again.

It also protects younger listeners who are still developing their own understanding of what words mean.

Lastly, there are so many swear words in our society today so why would we want to increase exposure?

Racist statements can die, and nobody will miss it.

How to turn explicit lyrics into a radio edit

Using explicit song lyrics in your content is a great way to engage your audience...

But sometimes you need to remove it.

Strong language is bad for business.

To remove the strong language, you will need:

Generally, you censor out strong language when recording all the tracks.

(The pain of censoring a mastered track... Is pretty much mental abuse to the engineer.)

This is sometimes not possible, so if this statement applies then you must add effects.

Otherwise, you can extract the vocals to one track and work that way.

You can either silence the strong language or add a warp effect.

It's up to you to determine how you song write, but I thin the warp censorship sounds better.

Here are examples of censoring a word/sentence in your song:

You might think that the first thing you should do is to stop posting parental advisory explicit content altogether...

First and foremost, you should delete old or explicit posts from your account.

Brands want to work with influencers who have a clean reputation.

Your social media posts are an indication of what people can expect from your content.

Brands won't want to work with you.

Lil Wayne can get away because of his brand equity.

Otherwise, the parental advisory explicit content is where you belong.

But if you post pictures of the latest fashion trends, they will be more likely to reach out to you.