WAV3POP's Breakdown: How to Make It As Artist

What if I told you that breaking it as an artist is less "luck" and more actionable steps? (Hopefully you wouldn't beat me up!)

In reality it comes off as a distant fantasy to many, in fact many artists don't believe it. It's not that you think it's wrong... it just puts a lot more responsibility on you.

Have no fear my friend. There is a lot in store when it comes to engineering your way to musical stardom - but I won't be the one telling it...

None other that the artist group WAV3POP will be doing most of the talking. See, they are the classic example of the studio wizard turned rock-stars.

It's important to study what others have done to get their results in order to see where you can take yourself. This is extremely true for organic group like WAV3POP. It's a no industry-plant zone, baby!

Let's dive right into it and discover the growth machines to be used/followed for success.

the meeting - How it all began

Let's take a trip down memory lane all the way to September 2019. So much more in store than I would have ever expected.

Another casual day just surfing the gram I got plugged in deep, we've all been through these types of days, just viewing man artist profiles.

All until I stumbled upon WAV3POP - the Rap/HipHop Duo. You can guess how excited I was when I saw them because I noticed that they operated on a different level than most artists.

Instantly we could see there was much more going on that accompanied their catchy hooks and flows. We wanted to get to the bottom of it.

WAV3POP are what we classify as hard working music entrepreneurs. We reached out and asked questions that we know aspiring musicians would be interested in. Here was our conversation:

The discussion, what we learned:

Question 1: How many years have the two of you been working together as WAV3POP?

Question 2: You guys have amassed Over 50 Thousand (Now over 64'000) Instagram Followers.

The two of you interact with your fans in the comments of your posts more than any artist we’ve seen of your size. Do you think this has played a part in your Social Media Success?

Answer: We for sure think that contributes to our success, we make it a point to make sure we answer as many comments as we can.

It’s always good to interact with the fans because they appreciate it and it’s also a way we show them that we appreciate them as well. Without them we wouldn’t be anything.

Question 3: The two of you have managed to pull off over a million streams on a single track on Spotify. What is 1 tip more aspiring artists should know about when trying to grow on Spotify, Apple Music etc...?

Answer: A good thing to keep in mind is that you have to keep pushing a song because sometimes the ones that nobody likes in the beginning end up being your biggest hits. 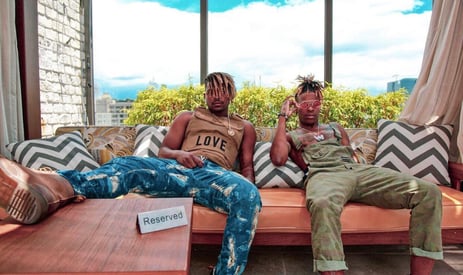 @WAV3POP chilling after a proper studio session. You know they made some heat

Question 4: What did that moment feel like when “Addicted” hit a million streams, and what did you guys do to celebrate?

Answer: I remember we were in Houston when it hit a million streams, it was a dope feeling man.

We ended up going out to the club and performing that night as well and then we hit the studio and made more music. It was a sign that the work we were putting was working.

Question 5: After doing more research into WAV3POP, we realized you guys do so much more than just release your own music. You guys have a media brand, events and your own clothing line you’re developing.

We would consider you music entrepreneurs. Do you think this accurately represents you guys? Would you encourage others to incorporate other ideas in with their main music project?

Answer: That’s exactly what we are. We believe that artist are way more than they realize. People love us because of our craft just like any other brand like Nike or Gatorade we are a business.

It’s the same as running a company and the artist should be their own CEO. We think that it’s very important for artist to know their worth and not accept anything less than that. 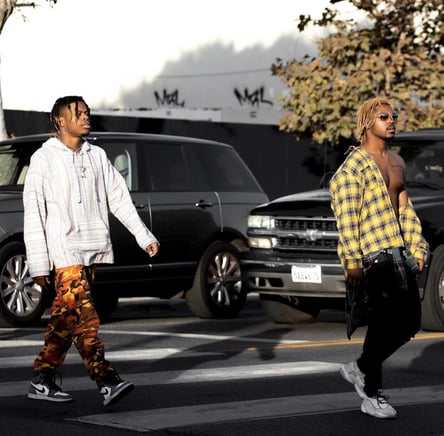 Question 6: Let’s say you guys have to start over. 0 Following on Instagram. 3 or 4 songs lined up ready to be released. What 3 areas would you devote your time to get back up to where you’re at now?

Answer: We would for sure devote the most time into the planning and organization of everything. After grinding at this music thing for as long as we have.

We’ve learned that it’s a fast paced life, a lot happens in a short amount of time, and it’s really easy to get lost in the sauce so you need to stay organized in order to make the necessary things happen that will take you to the next level.

Question 7: You have a new single out. It’s called “CANDLESTICK”. It’s features an extremely catchy hook.

When you guys hit the studio, is the goal to create a powerful flow or to write a catchy hook, or perhaps a new sound? Or do you go in and whatever comes up, comes up?

Answer: Honestly we just go in the studio and do our thing. The one thing we never have a plan with is music. We feel like a lot of people take music too seriously in the creative aspect.

For us it’s just us expressing ourselves and having fun. Every time we try to go in and do something specific it feels forced. Our best songs are just straight off the top of the dome from the vibe we create.

Question 8: Where do you see yourselves in 1-2 years from now? (And we can’t wait to follow up!)

Answer: We see ourselves being the biggest duo in the game. Straight up! We are working harder than ever right now and we aren’t going to stop until that goal is aggrieved.

Multi-platinum singles/albums, world tours, and even movies! There’s no limit to what we can do

Question 9: So we’d love to wrap up this insightful Q&A with something fun. We have to know, what artist would you guys love to collaborate with in the future?

Answer: We got to do a song with Drake he’s been the GOAT of our generation. That would be so dope!

Doing a song with OutKast would be crazy too. I mean they are like the people who paved they way for duos. That would literally be legendary.

When it comes to asking questions such as how to get 1 million streams on Spotify, Boost Collective makes it our mission to acquire information most relevant to an aspiring artist.

As of our discussion, WAV3POP has reached over 60,000 followers on their Instagram page, and shows no signs of slowing down! It’d mean the world to us and our friends WAV3POP if you’d be so kind as to follow our pages!

To start seeing results through social media, it’s important to know what’s needed to use sites like Instagram, Tik Tok, Facebook… effectively. Check out our article titled Using Social Media as a Music Artist in the Modern Music Space